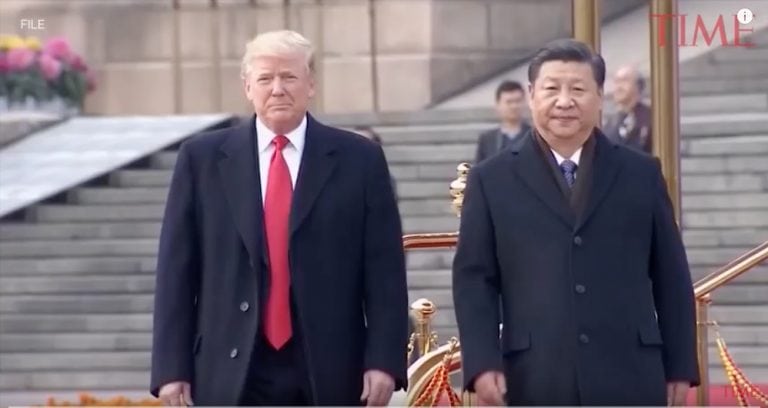 As many hoped, the highly anticipated Trump-Xi meeting in the Buenos Aires G20 Summit resulted in a truce. The devil is in the details.

The statement was completed only after hours of diplomatic bargaining over the night. As far as the European Union (EU) was concerned, the U.S. was the lone holdout on almost every issue in Buenos Aires, particularly in climate change.

Following the summit’s close, Presidents Trump and Xi and their top aides met in a highly-anticipated dinner, which lasted longer than expected. Either there was magic dust in their grilled sirloin steaks paired with a malbec from the Argentine winery Catena Zapata. Or perhaps, just perhaps, reason finally prevailed.

According to early reports, U.S. and China agreed to put on hold new tariff increases. Following Buenos Aires, the White House said that, after a “highly successful meeting”, Trump had agreed to leave tariffs on U.S. products at a 10% rate after January 1, while China agreed to buy a substantial amount of products from the U.S.

The White House also said that China has agreed to start purchasing substantial U.S. agricultural, energy, industrial and other products from the U.S. to reduce the trade imbalance; and that the US and China agreed to try to reach an agreement on several trade issues “within the next 90 days.”

The first impression is that the Trump-Xi Summit may have achieved a critical truce, de-escalation of tensions, and possibly a path toward a long-term compromise.

The timeout came at the 11th hour.

Last October, Roberto Azevêdo, Director of the World Trade Organization (WTO), said that the trade war between the U.S. and China was far from over. The speech preceded the release of the WTO Indicator, which suggested that trade growth is likely to slow further into the fourth quarter of 2018 and below-trend trade growth in the coming months.

After a sharp upswing in 2017, both exports and imports in Asia had held up very well year-to-date, with continued double-digit growth in many economies. But since the onset of Trump’s tariff wars in spring, elevated uncertainty has haunted the global economy.

According to WTO, merchandise trade volume growth was expected to reach 4.4% in 2018, which is still below the 2017 level. But as Trump’s tariffs have escalated tensions, a fall in business confidence and revised investment decisions may soften the outlook. Moreover, a full trade war could derail trade recovery for years.

According to the UN, global investment flows were projected to resume growth in 2017 and surpass $1.8 trillion in 2018. Thanks to U.S. neo-protectionism, they fell to $1.5 trillion last year. The current status quo looks even gloomier; especially with the trade tensions and central banks’ planned normalization.

Three scenarios illustrate the rising economic stakes of Trump’s tariff wars that have rapidly expanded from a bilateral trade conflict to a potential global trade war.

Last July, U.S. and China imposed 25% tariffs on $34 billion of the other’s imports and levies on another $16 billion. In this $50 billion Muddling Through Scenario, the tariff’s economic impact would have been limited to 0.1% of Chinese GDP and 0.2% of U.S. GDP, respectively.

Recently, Trump has threatened with further tariff escalation. In the ‘America First’ Scenario, the stakes will quadruple to $200 billion, with soaring collateral damage. In China, it could shave off 0.4% of GDP; in the U.S., 0.8% of GDP.

If the stakes of the White House’s tariff war would escalate to $500 billion – Trump’s pre-Buenos Aires goal – the potential collateral damage would increase tenfold from the first scenario. In this Global Trade War Scenario, China’s GDP could take a hit of 1%, but the U.S. GDP would suffer a 2% impact.

How will these trade war scenarios impact global growth prospects?

As the global economy has passed its peak, thanks to rising interest rates and global trade tensions, each trade war scenario implies different growth prospects (Figure). 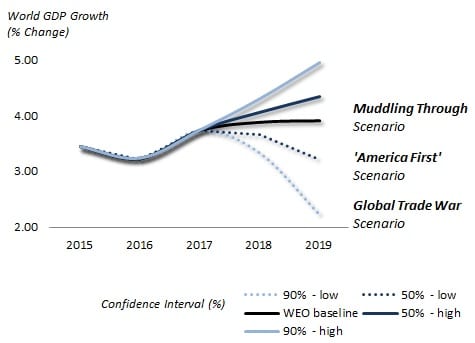 In the Muddling Through Scenario, both full trade war and ‘America First’ prospects are avoided. A good start would be a bilateral tariff truce starting in early 2019. But it is predicated on successful bilateral diplomacy that will lead to positive prospects in the second half of 2019. In this case, global growth prospects would remain close to the OECD/IMF baselines at around 3.5%-3.9% – possibly even higher.

In the ‘America First’ Scenario, neither truce nor diplomacy would prevail. After spring 2019, continued friction would result in progressive escalation and spillovers in global economy. As a result, global prospects would dampen as world GDP growth in 2019 would sink to 3% or worse.

In the Global Trade War Scenario, diplomacy would fail, while ‘America First’ escalation would spread across the world economy. Risks to global outlook would overshadow world GDP growth, which would plunge to 2%-2.5% for several years to come – which would translate to plunging world trade and investment, and new geopolitical conflicts.

After Buenos Aires, the Global Trade War scenario has been temporarily suspended. Yet, the ‘America First’ scenario has not been fully reversed.

We’ve been there before. After the Trump-Xi Florida summit in April 2017, U.S. and China announced a 100-day action plan to improve strained trade ties. Yet, only two weeks later, Trump issued a memorandum, which directed Commerce Secretary Wilbur Ross to investigate the effects of steel imports on national security – and that became the first shot in the bilateral trade war last spring.

With the truce, the Muddling Through scenario prevails momentarily but it can easily reverse back toward escalation, even global trade war.

If the White House and the Congress fail to achieve a decent compromise in the Trump trade wars, the complications would degrade global economic outlook for years to come.

The stakes are historical. Failure should not be an option.

ABOUT THE AUTHOR
Dan Steinbock is the founder of Difference Group and has served as research director of international business at the India, China and America Institute (US) and a visiting fellow at the Shanghai Institute for International Studies (China) and the EU Center (Singapore). For more, see http://www.differencegroup.net/

Based on Dr. Steinbock’s briefing on the Trump-Xi meeting and its impact on global growth prospects on December 2, 2018

MSM Is Getting Weirder, More Frantic, And More Desperate By The Day