HELP ENLIGHTEN YOUR FELLOWS. BE SURE TO PASS THIS ON. SURVIVAL DEPENDS ON IT.
Plane crashes, climate change storms, crumbling infrastructure, gouging drug companies, a repugnantly mercenary political system...All of these disasters are directly attributtable to capitalism, especially as it exists in the US in its most savage and unregulated form. Corporations write their own rules—from Big Pharma to big aerospace firms like Boeing— and in the meantime, while we dump trillions into criminal wars, our infrastructure goes begging, accidents and unnecessary suffering take place all over the place, as these images also prove. Below a short video we prepared of this ghastly inherent feature of capitalism.

A limited-circulation video prepared by TGP.

The Boeing disasters: 346 more victims of capitalism
The tragic and preventable deaths of nearly 350 people demonstrate certain realities of contemporary social and political life. The capitalist system is based on the maximization of shareholder profit, not the satisfaction of the needs of society. If endangering the lives of hundreds of people will lead to higher profits, such a risk is justified.

In the wake of two deadly airplane crashes that have killed 346 people, it has become clear that executives at aerospace giant Boeing repeatedly subordinated basic considerations of safety to profit, aided and abetted by the federal government.

The first disaster occurred on October 29, when a Boeing 737 Max 8 operated by Lion Air crashed thirteen minutes after leaving Jakarta, Indonesia, killing 189 people. That same plane only narrowly averted disaster a day earlier, Bloomberg reported this week, when a third, off-duty pilot who happened to be on the flight, intervened under similar conditions that ultimately caused the crash.

Beginning on March 11, every country in the world grounded the 737 Max 8, citing overwhelming safety concerns. The United States was the final holdout, but it grounded the aircraft on March 13.

“Boeing, in developing the 737 Max 8, obviously felt intense competitive pressure to get the new aircraft to market as quickly as possible,” wrote Captain ‘Sully’ Sullenberger in a column in MarketWatch this week. Sullenberger is the pilot who safely landed an Airbus A320 on the Hudson River in 2009 and a leading air safety expert. 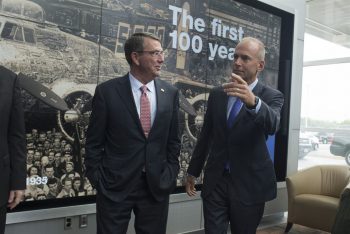 Boeing CEO Dennis Muilenburg (r) with then Secretary of Defense Ashton Carter—bosom buddies, of course. Muilenburg and his ilk belong in jail, with their wealth confiscated.

“When flight testing revealed an issue with meeting the certification standards, the company developed a fix… but did not tell airline pilots about it. In mitigating one risk, Boeing seems to have created another, greater risk,” he wrote.

Sullenberger added, “After the crash of Lion Air 610 last October, it was apparent that this new risk needed to be effectively addressed.” But instead of grounding the aircraft and immediately fixing the problem, Boeing did everything it could to conceal the deadly defect and keep the aircraft flying.

In other words, Boeing executives evidently acted in a reckless, negligent manner, contributing to the deaths of 346 people.

Sullenberger concluded, “It has been reported that Boeing pushed back in discussions with the FAA [Federal Aviation Administration] about the extent of changes that would be required, and after the second crash, of Ethiopian 302, the Boeing CEO reached out to the US President to try to keep the 737 Max 8 from being grounded in the US.”

Both the FAA and the Trump administration, for their part, were more than willing to run interference for the company.

The close integration between the airline industry and the agency nominally tasked with regulating it is well documented. In 2005, the FAA introduced a new program whereby aircraft manufacturers could choose their own employees to serve as FAA “designees,” charged with certifying the safety of their commercial planes. Since then, there has been virtually no independent oversight of the safety of any new civilian planes, those produced at Boeing or elsewhere.

During the 737 Max 8 rollout, Boeing told its pilots that they could learn all they needed to know about flying a new type of airplane from a 56-minute presentation on an iPad and a 13-page manual. Both were approved by the FAA and the pilots’ union, and neither included any information about the system likely responsible for the crashes, the Maneuvering Characteristics Augmenting System, or MCAS.

Fact is, Boeing and other aerospace firms have been able to eviscerate and take over the duties of the FAA, leaving the fox in charge of the chicken coop.—Editor 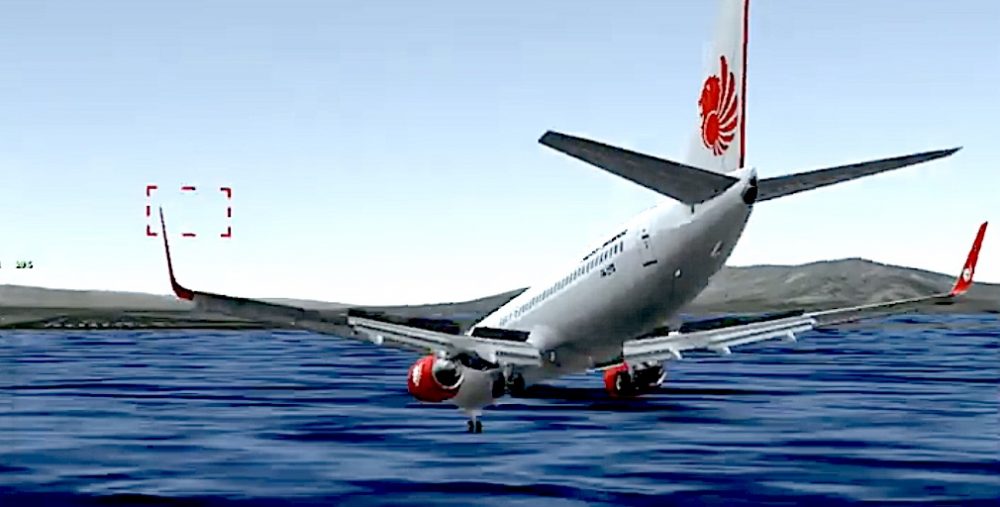 Boeing is a top defense contractor with extensive ties to the military-intelligence apparatus. Patrick Shanahan, the deputy secretary of defense, has worked for Boeing for three decades. Moreover, the current secretary of transportation, Elaine Chao, is the wife of Mitch McConnell, who has received hundreds of thousands of dollars in campaign financing from Boeing.

Moreover, Boeing is a key part of the US financial elite’s war for control of markets. Since the 737 Max 8 series was released in 2017, the sales of just 350 of the 5,011 orders Boeing has received have accounted for 50 percent of the company’s profits. Boeing itself has maintained its status as the world’s fifth-largest defense contractor and is currently the largest US exporter.

Shares of Boeing have more than tripled since the election of Donald Trump and his promises of further deregulation, making it the highest- priced stock in the Dow Jones Industrial Average. The company has accounted for more than 30 percent of the increase of the Dow since November 2016.

The tragic and preventable deaths of nearly 350 people demonstrate certain realities of contemporary social and political life. The capitalist system is based on the maximization of shareholder profit, not the satisfaction of the needs of society. If endangering the lives of hundreds of people will lead to higher profits, such a risk is justified.

Governments, in their turn, serve to protect the interests of the corporations, a reality demonstrated by the Trump White House’s efforts to protect the largest US exporter, and the repeated actions of the FAA to cover up the series of disastrous shortcuts taken by Boeing.

These disasters highlight the need to take the airline industry out of the hands of Wall Street so that air travel can be brought into harmony with human and social needs.

The technological advances that have been made in air travel over the past decades are indisputable. For the first time in world history, travelers can move from any two points in the world within a single day. This technology must be freed from the restraints of giant corporations and of the capitalist system as a whole. This requires the nationalization of the major airlines and aerospace companies, their transformation into publicly owned and democratically controlled utilities to provide for social need, not private profit.

The striking picture of disaster Capitalism is that Boeing corporation through negligence and deceit has caused the death of more then 346 people. However Dennis Muilenburg the CEO of this infamous company was allowed to take home an exorbitant sum of 23.8 million dollars.

Even more striking is the fact that these murderers will never see the walls of a prison cell.

That money should be confiscated and paid to the families of the people killed.

In Plain Sight: Bolsonaro, Moro and the CIA