India and Brazil Are Now the Global Worst Coronavirus Nations

India and Brazil have now overtaken the United States as the world’s worst performers at controlling the cononavirus-19 plague. 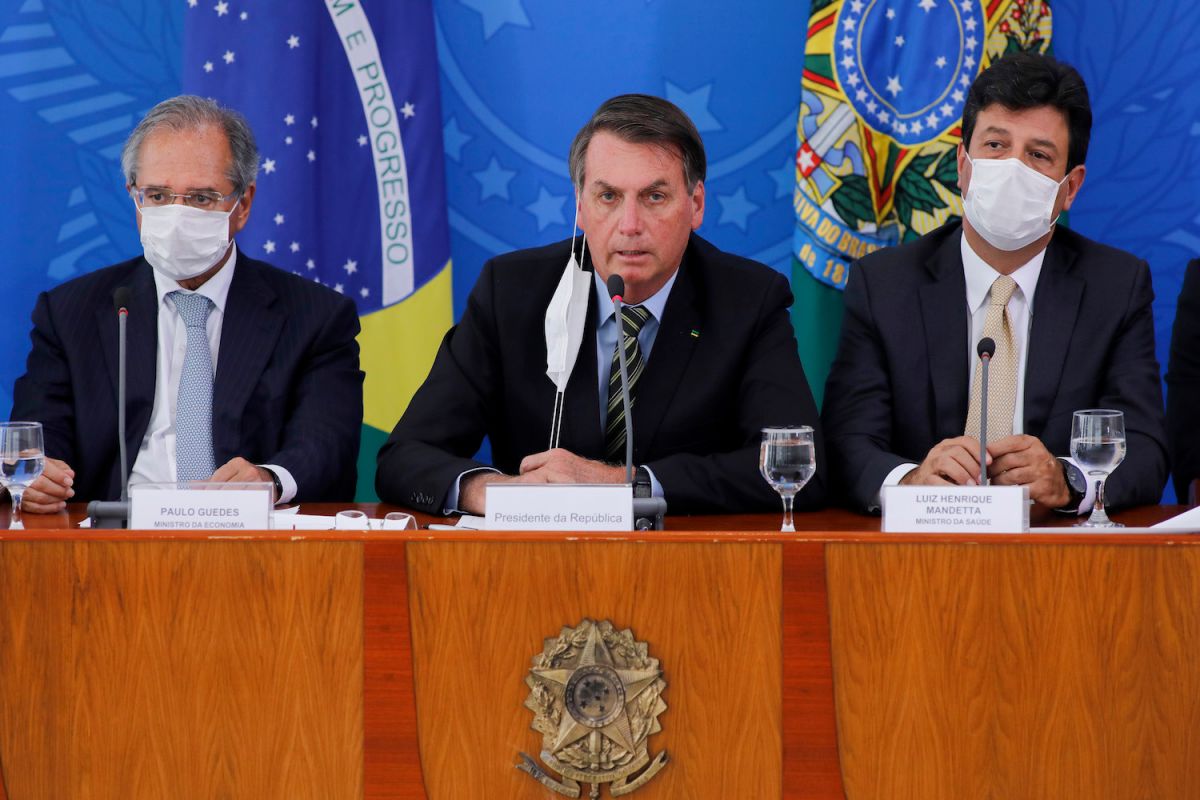 Bolsonaro publicly defying the mask wearing recommendation. He contracted Covid-19, but seems to have emerged from it largely unscathed.

The chart of the numbers of daily new cases in India shows the daily count soaring more than in any other country except Brazil, whereas in the United States, the daily number of new cases has plateaued ever since it hit 72,278 on July 10th, three weeks ago.

Right now, the “Tot Cases/1M pop” are 14,207 in USA, 12,537 in Brazil, and only 1,229 in India; so, clearly, India has much farther yet to go on this than do either of the other worst-three Covid-19 nations.
The “Deaths/1M pop” are 473 in USA, 435 in Brazil, and only 26 in India; so, on that measure, also, India’s situation will be becoming vastly worse, whereas both USA and Brazil might have their worst behind them on this. However, because Brazil’s daily new cases seem to be exploding almost at the same rate as in India, one can reasonably expect Brazil’s 435 to rise above America’s 473, but India’s 26 will probably not (unless India’s sharp rise in cases continues for a long time). Consequently, Brazil could turn out to be the worst of all the world’s Covid-19 hells.
At the opposite end, the world’s best Covid-19 countries, as measured on “Tot Cases/1M pop,” are, in order starting with the best: Laos, Myanmar, Vietnam, Papua, Tanzania, Cambodia, Taiwan, Uganda, Burundi, Angola, Syria, Niger, Thailand, Burkina Faso, Chad, Yemen, China, Mozambique, Democratic Republic of Congo, Togo, Jordan, Mali, Tunisia, Sri Lanka, Benin, Ethiopia, Rwanda, Somalia, South Sudan, Nogeria, Zimbabwe, Malawi, Sierra Leone, Cuba, Liberia, Japan, Sudan, Malaysia, and South Korea, all of which nations have fewer than 280 cases per million population and have populations that are higher than 5 million people (my cut-off-point). Some of these nations are in civil wars which cause few people to want to visit them; some aren’t much participating in international trade and therefore have little traffic with foreigners; some are terribly poor and therefore have almost no tourist industry, others might soon burst out with soaring increases in cases or deaths. But some of these countries are just doing a spectacularly outstanding job of protecting their populations.
On July 25th, I headlined “THE LANCET Praises Chinese Model for Coronavirus Policies” and listed the rates both for cases and for deaths in the world’s best-performing countries as of that date, and China was the 18th-best country on cases, and 25th-best on deaths, out of the 124 countries that had 5 million or more population. (The 91 countries which were smaller were not being counted.) Today, China still is 18th-best on cases, and 25th-best on deaths. Out of the same 124 countries, U.S. is the 3rd-worst on cases, and is the 8th-worst on deaths. On cases, Chile is the worst at 18,593, and Oman is second-to-worst at 15,473. U.S., at third-worst, is 14,185. On deaths, Belgium is the worst, at 849, and UK is 2nd-worst at 679. Spain is 3rd at 608, Italy is 4th at 581, Peru is 5th at 576, Sweden is 6th at 568, Chile is 7th at 494. And U.S. is the 8th-worst at 472. However, out of all of the bad countries, only India and Brazil are still accelerating into coronavirus-19 hell. Consequently, it might be reasonable to expect both of them to achieve ultimately 18,593 on cases, and 849 on deaths. For India, that would be, on cases, at 18,593 cases per million and a population of 1,381 million, 1,381x18,593 cases, or 25,676,933 cases. On deaths, at 849 per million of population, it would be 849x1,381 deaths, or 1,172,469 deaths. Right now, the U.S. has 4.7 million cases and 156,612 deaths. India’s population is 4.17 times larger than America’s. India is probably at the start of its ascent into this infection. The believers in herd immunity for coronavirus-19 should relocate themselves to places such as India and Brazil, for their safety, because those are the places that will have the highest immunity.
In fact, CNN on July 26th bannered “India's PM says the country's fight against Covid-19 has proven the world wrong” and opened their stenography from India’s Government:

Indian Prime Minister Narendra Modi has claimed that his country's response to the pandemic has defied global expectations.
“The way Indians came together to fight against coronavirus in the last few months, we have proved the world wrong,” Modi said Sunday, while delivering his monthly radio address to the nation.  India has the third-highest number of virus cases worldwide, with more than 1.3 million recorded instances of Covid-19 and 32,060 deaths, according to Johns Hopkins University.
Modi claimed the coronavirus recovery rate was better in India than in other countries but warned that the threat of the disease remained. “We need to remain vigilant. We have to remember that coronavirus is still as dangerous as it was in the beginning,” he added.

Is it really true that “the coronavirus recovery rate was better in India than in other countries”? In India it is 97%, and that is higher than the 94% global recovery-rate. Brazil’s is 95%. America’s is 94%. So, at least Modi didn’t lie about that. Maybe some day, America’s performance on recovery-rate will be as good as India’s is. China’s recovery-rate is likewise 94%. So, India’s healthcare system does seem to be better than average — better than China’s, better than America’s, and better than the global average, at least on this. And a little better than Brazil’s, which itself is 1% better than the global average. However, Vietnam, for example, has a 99.6% recovery-rate, and Venezuela, which is not that good but among the best-performing nations, has a 98.5% recovery-rate.
The key isn’t so much the healthcare system, as it is the public health system. And that’s quite evidently poor in all three of the worst-performing countries: India, Brazil, and U.S.
Investigative historian Eric Zuesse is the author, most recently, of  They’re Not Even Close: The Democratic vs. Republican Economic Records, 1910-2010, and of  CHRIST’S VENTRILOQUISTS: The Event that Created Christianity.
/su_shadow]

THREE STRIKES YOU’RE OUT FOR WESTERN PSYCHOTHERAPY: THE...