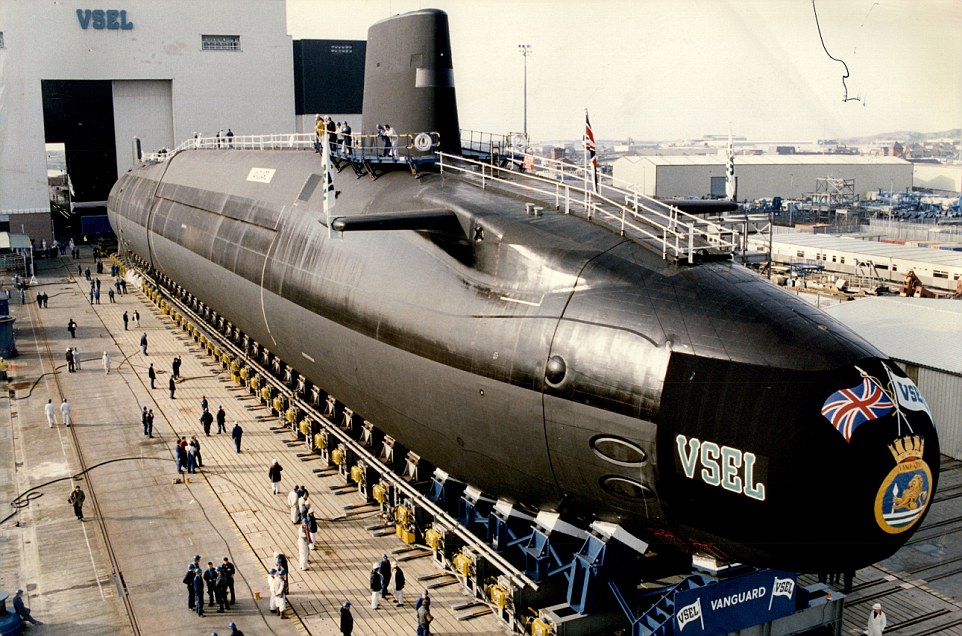 A Trident British nuclear sub. London's ambitions to play the imperial game—even by slavish association with the US hegemon—may bankrupt the country.

by Peter Koenig, crosspost with the Saker Blog

A shift in the world’s power base, alliances and economic strength, will undoubtedly happen within the coming years. In fact, it’s already happening. But not necessarily according to Klaus Schwab’s (WEF) “The Great Reset”. “Not necessarily”, because We, The People, can stop it. Plus, there are nations and their allies, who do not agree and won’t accept the enslavement of much of the world through the self-anointed powers of an ultra-rich elite.

The Saker, in his blog “Big, huge changes, in the near future (a tentative list)” (26 September 2021)  https://thesaker.is/big-huge-changes-in-the-near-future-a-tentative-list-of-the-major-ones/ has covered most of the geopolitical transformations that are most likely to take place in the foreseeable future.

Consider the SCO – the Shanghai Cooperation Organization – has just integrated Iran as new member. This – in the west – little-talked-about organization, association of eastern countries, created by China and Russia on 15 June 2001, started out with 7 Central and East-Asian members, Republic of Kazakhstan, the People’s Republic of China, the Kyrgyz Republic, the Russian Federation, the Republic of Tajikistan and the Republic of Uzbekistan.

Since then, others have joined, India, Pakistan and now Iran. Associated members are Malaysia and Mongolia. Which makes the SCO one of the most powerful, possibly THE most powerful, socioeconomic and defense strategy organizations in the world – with nearly half the world’s population and about one-third of the world’s GDP.

One could undoubtedly ask, what does India have to do with this club? India is swinging from West to East to West, wherever the crumbs of fortune seem to be larger. Recent photographs of India’s PM Narendra Modi with President Biden, together smiling to the media – speaks for themselves.

Well, for sure, there are macro-strategic reasons for keeping Modi’s India in the SCO-association. The day will come when India will be India again – not just expressed by the will of the people, but also by her leaders.
—
As well illustrated in The Saker’s essay, the west is destined to break apart and eventually collapse. It's reminiscent of the picture of a falling airplane, where the passengers are arguing and thrashing out on each other, while the rapidly descending plane is breaking apart – and soon hitting the ground. And probably goes up in smoke. Probably it won't be that dramatic – but perhaps close.

Indeed, Europe cannot decide whether they belong to the western AngloZionist block that has also captured Australia and New Zealand – or to the much stabler, and much more peaceful and congenial mega-continent – Eurasia. Just a couple of figures to ponder: 55,000,000 km2 (21,000,000 sq mi), and 5.4 billion population, as of October 2019 – about two-thirds of the world population.

It’s actually a no-brainer. We will soon see whether Europe, the European Union, eventually will fall apart for not knowing where to belong, or make a last-minute right decision. It’s a pity, that the “system” insinuating ruling the World Order, does not see, or does not want to see, that they are betting on a paper tiger – like NATO – to come to its rescue.[ Which begs another question: rescue them from WHAT? A propaganda/strategic invention created by the US to justify its own imperialist designs?—Ed] —
Let’s look at AUKUS for a moment. It stands for Australia, UK and the US and aims at modernizing the primary denominated beneficiary – Australia – over the coming decades to take up security challenges in the Indo-Pacific

The plan—as officially outlined, which may certainly hide its own truer motives— is to give access to cutting-edge military technology to Australia by its two partners, including futuristic capabilities like artificial intelligence and quantum technologies. This refers to the recent deal of US/UK-built nuclear submarines, canceling the submarine contract Australia had with France.
See this https://economictimes.indiatimes.com/news/defence/aukus-programme-an-explainer/articleshow/86282058.cms?utm_source=contentofinterest&utm_medium=text&utm_campaign=cppst

An advanced Russian Yasen-class nuclear sub. They soon may operate in greater numbers in the Indo-Pacific. Western criminality and stupidity is leaving them no choice, and actually fortifying the Sino-Russian alliance.

And imagine, this is just one of the first “deals” of the rather new AUKUS alliance. What may follow, are more such self-centered, immediate-profit-oriented deals that help further breaking apart the once-upon-a-time so powerful western alliance.

The new AUKUS deal will provide Australia with nuclear-powered submarines. But the agreement is so new, neither cost nor time frame are so far public knowledge.

France withdrew its ambassadors to the United States and Australia after U.S. President Joe Biden revealed last week a new tripartite alliance including Australia and Britain that would allow Australia to amass a fleet of at least eight nuclear-powered submarines.

Russia Today (RT) sums it up: It is no surprise, then, that the newly forged Atlantic-Pacific triple alliance between the US, Great Britain, and Australia, known as AUKUS, has caught the eye of Russian leaders and defense chiefs. Announced on 15 September, the pact was presented as targeting China. However, it’s clear its geopolitical implications won’t be felt in Beijing alone.

The New AUKUS nuclear bloc won’t just battle China, it will take the West into confrontation with Russia too, Moscow’s security chief says.

Initially cautious, Moscow’s response has quickly become more critical. Nikolai Patrushev, secretary of Russia’s National Security Council, has denounced AUKUS as the “prototype of an Asian NATO,” set to expand, and directed against both China and Russia.

The essence of AUKUS is not complicated. While it covers various areas, such as cyber and artificial intelligence, its core is the transfer of technology from the USA to Australia. And not just any technology, but that of nuclear-powered submarines, which, until now, have been in the possession of only six states: China, France, Great Britain, Russia, the USA, and – in a complicated manner dependent on Russia – India. And of course, never to be mentioned: Israel.

In conclusion – Moscow may, accordingly, expand its own nuclear submarine fleet in the Pacific. In such a world, the already existing strategic partnership between China and Russia would only get stronger.

In parallel to this AUKUS treachery on France, Biden is hosting a Quad summit (Quad Alliance = Quadrilateral Security Dialogue is a strategic dialogue between the United States, India, Japan and Australia). While the topic is not official news yet, it’s not difficult to guess that the subject is how to “contain” – read “aggress” Russia and China. And again, strangely, prominent SCO member India plays along.
—-

There is the economic impact such a deal may have, not only in figures of hard money, but also as a precedent. No rules are respected. This is the “free market” of the New Brave World, under which not even traditional allies are respected and secure.

It is difficult to predict how France under Macron will act in response. Macron is certainly no DeGaulle. President Macron – or his aides, have insinuated that in response to the abrogation of the Aussie-French nuclear submarine deal, France may exit NATO. We can easily speculate, that’s what DeGaulle would have done. That would be something to be proud of for France and, in the long run for Europe too. But it is unlikely to happen. Macron is “guided” by darker forces.

This socioeconomic and political break-up of the so-called western alliance, will certainly hurt a lot of people, but the world, Mother Earth, will survive, and most of those who have not betrayed their beliefs may too.

It is unfathomable what the onset of Covid has destroyed in terms of socioeconomic wealth and simply, wellbeing. People in the Global South, about whom hardly any western politician speaks, are dying—from hunger, despair, disease – and merely from desperation. According to the World Food Program, close to a billion people are already suffering from famine or are on the verge of seriously suffering from food scarcity.

The imminent break-up of the west will accelerate the shift of economic and political power to the east.

Europe has not much time to decide whether she belongs to the Future – the east – or to the defunct and decaying past, the West (self-destruction by egocentricity and self-imposed empire). It requires both, the (western) people to wake up and take back their governments, abducted by the dark invisible forces; and the human strength to survive on a level of no-revenge, non-aggression, despite enormous sacrifices that may have to be made to salvage our civilization.

Peter Koenig is a geopolitical analyst and a former Senior Economist at the World Bank and the World Health Organization (WHO), where he has worked for over 30 years on water and environment around the world. He lectures at universities in the US, Europe and South America. He writes regularly for online journals and is the author of Implosion – An Economic Thriller about War, Environmental Destruction and Corporate Greed; and  co-author of Cynthia McKinney’s book “When China Sneezes: From the Coronavirus Lockdown to the Global Politico-Economic Crisis” (Clarity Press – November 1, 2020)

Peter Koenig is a Research Associate of the Centre for Research on Globalization. He is also is a non-resident Sr. Fellow of the Chongyang Institute of Renmin University, Beijing.